Mexican Drug War is an ongoing conflict (since 2006) between the Mexican government and armed forces against criminal groups and drug cartels. Fragmentation of criminal groups and their enmity causes a high rate of violence and criminality in the country. Since the political system became more plural and fragmented, all three presidents of the new millennium combat with these groups. The victory of Andrés Manuel López Obrador (AMLO) in the presidential election in December 2018 means political shift and a huge change for the country. He is the first leftist president of Mexico in the modern history of the country, so there are big expectations of his government. The main aim of this text is to analyse the strategy and steps of the new Mexican president since his presidency.

The elections were held on 1st July 2018, and AMLO and his leftist party MORENA (National Regeneration Movement) got the majority of votes in both presidential and parliamentary elections. AMLO won 53,2% of the votes, which is over 30% more than the second Ricardo Anaya. Causes of AMLO’s popularity and success are simple. He is well known in the country as a former mayor of Mexico City (2000-2005), and he ran for president in the past two elections as well.

The main focus of AMLO’s campaign was to make a change. He wanted to do things differently than the two previous presidents. That period was about more or less stable economic growth but also rising insecurity and ongoing corruption. AMLO is reflecting these problems in the text called National Project 2018-2024. The project contains a government approach that combines guarantees of neoliberal continuity with specific proposals of social policies and justification of possible state intervention in economic sectors considered strategic (Gómez 2018, 181-188, Seelke and Garcia 2018). The new government focuses on fighting corruption, and “moralising” the country, reducing poverty and fight inequality and escalating crime and violence in a term he wanted to end it.

Fighting corruption, and “moralising” the country

During the presidency of Peña Nieto, more than a dozen governors have been investigated for corruption, in most cases for links to organised crime and for that several anti-corruption reforms from Peña Nieto government, very promising on paper have proved ineffective in practice (Gómez 2018, 186). AMLO proposed increasing prison sentences and prohibiting bail for those accused of corruption. Moreover, to fight corruption he wants to cut salaries of high government officials (Seelke and Garcia 2018).

The most important to develop and the top priority of AMLO is south of the country because it is the poorest part of Mexico. That is connected to improving the infrastructure and connection the Pacific port of Salina Cruz to the Gulf of Mexico. The president wants to create new job opportunities for young people and establish a universal pension for the elderly. Other topics contain education reform, revitalising the domestic agricultural sector and offering scholarships to students (Seelke and Garcia 2018, Graham 2019).

In a document called National Peace and Security Plan, 2018-2024 AMLO set the basis of his strategy with fighting criminality and violence. He promised to withdraw the military from the streets and restoration of human rights mainly in a context of their abuse (killings and torture). This strategy was raised during the presidential campaign (Rauls 2019).

However, after winning the presidential post, the primary tool to end the violence became the creation of the National Guard, a force under civilian leadership and stressing regional coordination of security efforts. AMLO also wants to focus on the roots of crime rather than on fighting against drug cartels as such (Martin 2018).

The new National Guard should replace the armed forces in the fight against the criminal groups and organised crime. This force will be set up of the ranks of the armed forces and federal police. Nevertheless, this step requires changes to the constitution, so AMLO needed to create a new bill which has to be approved (Ore 2018).

Current situation of the National Guard

The plan for the establishment of another official armed group AMLO presented in a very beginning of his presidency. However, as was already mentioned during the campaign, he stood for a more peaceful approach towards the criminals. Using the police and army (and creation of new security and armed forces) is more “traditional” way to fight drug cartels in Mexico. The decision to create the 60,000-strong National Guard force was about to be put into a public vote (Garcia and Gutierrez 2018). Nevertheless, this public vote never happened, and the Congress approved it (in December 2018 the Chamber of Deputies’ Committee on Constitutional Affairs approved the bill 18 votes in favour to 6 against). The Creation of National Guard involved a constitutional amendment and a new law called National Law on the Use of Force was introduced in May 2019. Formal operation of National Guard began on June 30, 2019 (Justice in Mexico 2018, Melimopoulos 2019).

The vision is to have 120,000 members in the unit by 2021 and even 30,000 more by 2023. That is twice more than it is now. However, the first problems appeared soon enough. A few days after the inauguration of National Guard, members of Federal Police protested against integration into this new force. They did not want to be in it with military soldiers and to be part of another militarisation (Nación 321 2019). Next ‘problem’ was the first operation of this force because instead of focusing on organised crime, the National Guard was helping in the southern border with migration from Central America (Zissis 2019).

Concerns about the functioning of the National Guard are still being discussed. Last information only approves it, because the new task for this force is to stop people from taking Uber at the airport. Questionable are also topics like human rights and whole legality of National Guard (Melimopoulos 2019, Navarro 2019).

Over 35,000 homicides were committed in Mexico last year (Holman 2020) and there is no evidence that the number of homicides would be lower.

Some analysts claim the reason for the rising violence is a political turnover together with AMLO’s inability to find an effective strategy to fight these groups. The logic about political turnover: “Criminal groups establish modes of coexistence with governments – ranging from tacit acceptance to outright cooperation — which tends to promote underworld stability. But when governing parties change, these patterns of interaction are upset, which injects of a jolt of uncertainty into the criminal landscape, with increases in violence often the result” (Corcoran 2019).

Another point is AMLO’s strategy to combat these groups. As was already mentioned, the strategy was changed during his campaign and official presidency. Still, he defines it in a different approach than previous presidents did, meaning it is not warring on drugs or seeking to capture or kill cartel kingpins. However, that denies a mission to capture Ovidio Guzmán in October (Sherman 2019).

From AMLO’s perspective, more important is to focus on the roots of crime with social programs. And that needs time to show up if these programs are working. Another way to fight organised crime and its roots is to support anti-money laundering office and to take aim at the finances of the powerful cartels, such as Jalisco cartel/Jalisco New Generation Cartel. AMLO said that “the best way to prevent criminal behaviour is by sending a message that these types of acts that violate trust and social norms will be punished” (Eschenbacher and O’Boyle 2018, Sherman 2019).

The attitude of the current president has changed during the presidential campaign and after the winning election. Firstly, he stands for a new approach in combating organised crime with no other militarisation of the country. The best way to describe this attitude is by the phrase from his campaign: “hugs, not bullets” (Sherman 2019). The creation of the National Guard, however, represents an ultimate shift from this approach and concerns are mainly about the militarization of the country with human rights violations. This “hybrid” force made up of police, army and navy include 60,000 members and the president wants to expand it in next years. Moreover, he relies more on longer-term instruments, such as social programs, to help combat crime in its foundations. Although the National Guard is already functional, the results of a social program are going to take more time to evaluate. 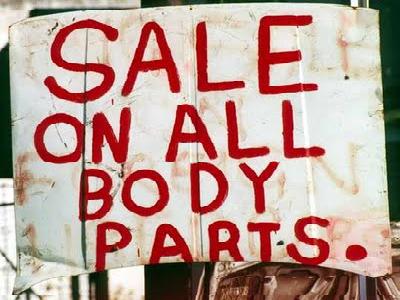 The Illicit Trafficking in Human Organs in Kosovo and Albania 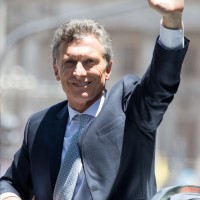 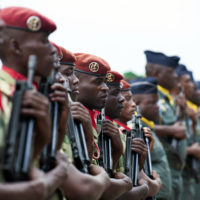